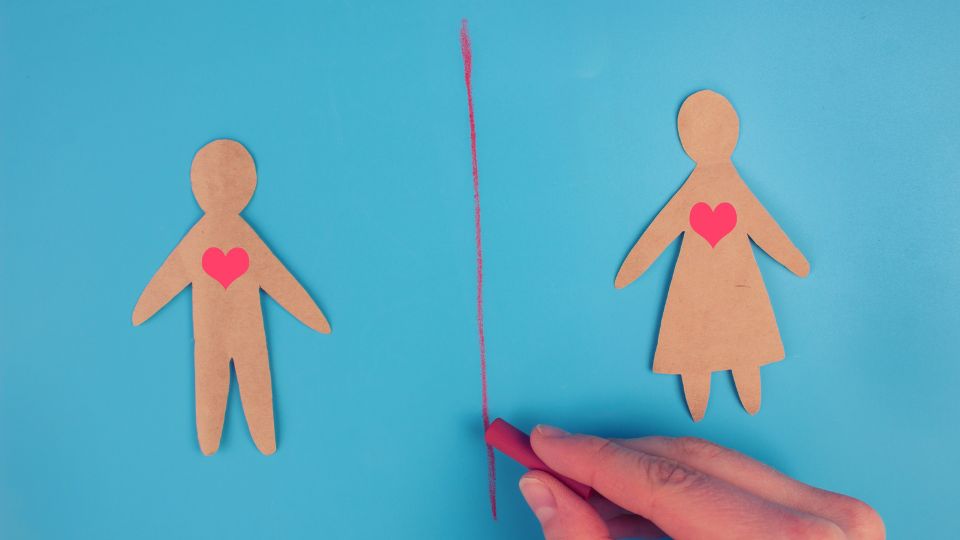 Alright, you have a crush on someone. It could be that you have been seeing each other for a while or recently had a couple of great dates. A man you got to know, with whom you had some good times and, of course, some bad times. Someone you really cared about and who saw your insecurities and also showed theirs at times.

Unfortunately, now he has suddenly blocked you on Facebook, the phone, other social media, and in every other possible way he can to avoid you. You now ask yourself only one thing:

I completely understand that this is difficult for you. Most women seeking help with this problem have no idea what exactly they did to cause this to happen. They feel that they are at fault and that there must be a very strong reason for their partner to do this.

Before I go into detail about why men distance themselves from women, I want to make it clear that it does not matter “who is in the right”.

Focusing on who is in the right won’t help at all. This is because it only forces you to deny your feelings of unhappiness and attempt to justify them.

But above all, I advise you to accept it. Moreover, to accept that he has suddenly blocked you and that he, for whatever reason, doesn’t want contact. As a result, you can look at your emotions honestly, deal with them honestly, and process your emotions more effectively.

If you’ve done that and have calmed down a bit by now, then it’s time to look at the reasons why he blocked you. But why is it important to look at those emotions first?

Studies have demonstrated that males who are exposed to intense emotions from their partners manifest less sympathy. That sounds very contradictory, yet that is the reality—men under pressure suffer a significant decrease in their capability to empathise.

Here are 3 Reasons why he has blocked you

Reason #1: He needs time to himself

Men are like wolves. They look for a quiet place from time to time to chill out for a while to get some peace and quiet to reflect on what they’ve been doing lately and what they want to do in the near future.

Men are taught to suppress their own emotions in public. According to Mensline Australia, this behaviour can be reinforced in the stereotype of the heroic male, so often represented in popular culture. Men tend to block women because they find it too painful to think about them. He can’t stand to be around you.

For example, he could be madly in love with you but feel that you don’t work well together. On the other hand, it might be that he hasn’t felt a connection for a while and needs some time to reflect on whether he wants to stay with you.

Ultimately, there are moments when a person requires time and the ability to think clearly to figure out the right course of action for himself. Such contemplation is impossible when he is with you, as it inhibits his capacity to be truly himself.

“It is simply very difficult for a man to express his emotions with you.”

Tip 1: Give him space

If this is the real reason for him blocking you, giving him as much time and space as possible to deal with his emotions is best. You will notice that the man feels a great sense of respect once you can do that.

Studies have revealed that many men do not feel they have enough peace when in a relationship. This leads to a considerable amount of dissatisfaction and frustration. If a man needs to take a break from the relationship, it might be beneficial to allow him time and space.

Tip 2: Focus on your own life

Of course, it’s petty for that man to block you from every social media platform suddenly.

But on the other hand, it also allows you to invest in other areas of your life. For example, focus more on your career or sports. Do something that makes you happy apart from the men.

By taking this approach, you will notice a rise in self-confidence and boost your mental resilience. If he chooses to get back in touch, you will be able to communicate with him with a level of confidence that he didn’t realise you had developed. And if he does not contact you, continue to use the time to focus on other aspects of your life.

Sure, you are hurting, but that pain will go away. The effort you put into working on yourself stays and will pay off. You will continue to reap the benefits of this, whether he comes back or not.

Reason #2: He doesn’t want to see you anymore

Sometimes I get women asking me the weirdest questions. “Christian, I have a boyfriend, and I dated him for a while. Now the guy blocks me on every social media account and deletes my number. I have no idea how this happened.”

When I asked further, I found out that the guy has made it clear multiple times that he is no longer interested and would like to stay just friends, or he does not feel like continuing the relationship anymore. If he has made it clear on numerous occasions that he does not want to be contacted. Yet, you keep trying to reach out, eventually, the person will become frustrated and take the drastic step of deleting your number and blocking you on all social media platforms.

When a situation like this arises and a man has already made it clear that he wants to end the relationship, any attempt to reach out will likely result in them blocking you on social media and other forms of contact. This usually occurs when a woman refuses to accept the breakup. My advice in this instance is simply one thing.

If he has clearly indicated to you that he no longer wants contact, then it is wise to listen to his desire.

When someone blocks you, it can be a very painful experience that causes you to feel both upset and angry, but it’s important that you deal with that sooner rather than later.

You only make it worse when you refuse to deal with those feelings. It’s like a Band-Aid: You can pull it off bit by bit, but that leaves a nagging pain that lasts a long time. Better to pull it off in one pull and then move forward.

That’s how you deal with heartbreaks.

Unfortunately, I know plenty of women who were dating a nice guy, who they slept with several times or even had a relationship with for a while…

Who then suddenly disappears from the face of the earth.

These types of men are often called players or also called jerks. They are usually not honest about what they want from women and are primarily focused on their gratification. They are not good at establishing long-term relationships, yet they are very good at manipulating women. Ultimately, they cannot or will not commit to a single woman for a prolonged period.

Tip 4: Don’t get involved with the wrong man.

You have now experienced dating a jerk. You now know what it’s like, how to recognise them, and how to deal with them. You know what to expect and what not to expect. In the future, be careful not to get involved with the wrong man and find someone who does respect and values you.

These were the three reasons why a man may Block you and four tips on dealing with it the right way.

I wish you good luck on this. If you have any questions, just let me know in the comments!