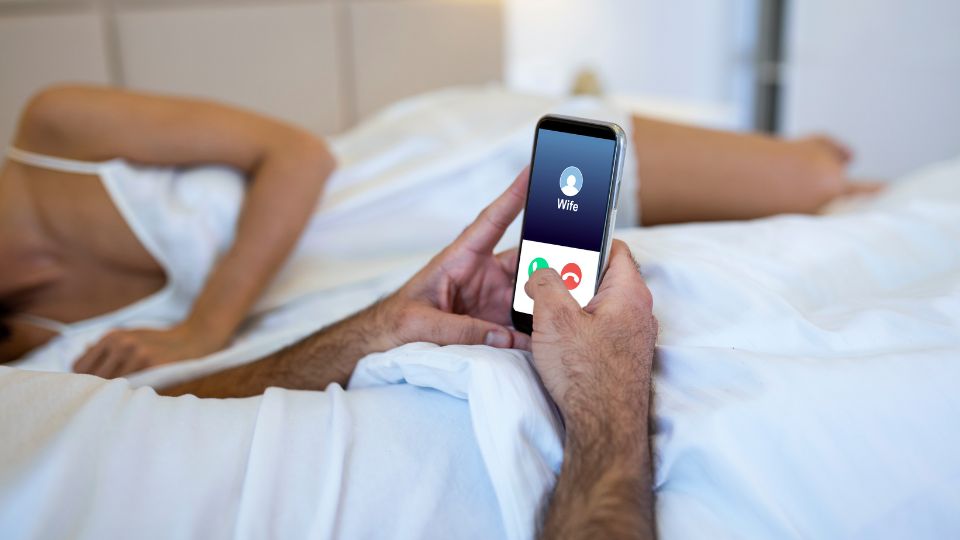 Fidelity refers to being faithful or loyal, especially to a spouse or partner. In the context of relationships, fidelity means being monogamous and not engaging in sexual or romantic relationships with anyone other than one’s partner.

It also involves being committed to the relationship and being honest and truthful with one’s partner. Fidelity is an important aspect of many romantic relationships and is often seen as a cornerstone of trust and stability.

You may have thought about whether your husband is being unfaithful at some point. While it’s crucial not to make assumptions without evidence, certain actions may suggest infidelity. Here are 10 signs that your husband may be cheating on you.

1. He is unreachable or takes a long time to reply

For some time now, you’ve had trouble reaching your partner. He takes a long time to reply to your text messages (when he does reply) and hardly ever picks up his phone. On the rare occasions when he does, he is cold and sends you away on the pretext that he has a lot of work to do. That’s the catch he’s busy cheating on you with someone else.

2. He lingers in the office

If he used to come home at fixed times, and for some time now, he has been coming home later and later. While it’s not uncommon for people to have busy schedules or work longer hours from time to time, if this behavior persists for an extended period of time, it could be a red flag.

3. He pays more attention to his appearance

If your husband begins to care more about his appearance, such as dressing up or paying more attention to grooming, this could signify infidelity. This behavior could indicate that he’s trying to impress someone else and seeking attention or validation from someone other than you.

Pay attention to these changes and have a candid conversation with your husband about your concerns. While it’s possible that he’s simply trying to improve his appearance for personal reasons, it’s worth considering if other indications of infidelity accompany this behavior.

4. He no longer shows physical affection or intimacy

The days when he was affectionate and intimate with you as soon as he got home from work are long gone. This behavior could indicate that he’s feeling disconnected from you and is looking for emotional or physical satisfaction from someone else. It starts to get suspicious for a man to go weeks or months without showing any physical affection or intimacy towards their partner.

5. He takes a shower when he gets home

If he quickly rushes to the shower without greeting you or showing affection when he comes home, it could be a sign that he’s trying to remove evidence of him sleeping with another woman. This behavior could indicate that he’s trying to get rid of smells such as another woman’s perfume or other physical evidence such as lipsticks, perspiration, or genital secretions.

6. He is more active on his phone

If your husband is suddenly spending more time on social media or messaging apps, it could be a sign that he’s communicating with someone else in a way that he doesn’t want you to know about. This behavior could indicate that he’s trying to hide his communication with this person or that he’s seeking emotional or social fulfillment from someone other than you. It’s essential to pay attention to this change in your husband’s behavior and trust your instincts.

However, it’s essential to remember that social media and messaging apps can be used for various reasons, and it’s possible that your husband is simply using them for work, to connect with friends and family, or for other personal reasons. However, if other signs of infidelity accompany this behavior, it could be worth exploring further. It’s always a good idea to trust your instincts and gut feeling.

7. He gives you gifts out of the blue

If your husband starts showering you with gifts without any particular occasion, it could signify that he’s trying to make amends for something. This behavior could indicate that he’s feeling guilty about something, such as infidelity.

8. He starts distancing himself

In the past, you and your husband spent a lot of time together when he came home. Recently, he’s been distancing himself and has excuses to be elsewhere. This behavior could indicate that he feels disconnected from you and seeks satisfaction or connection from someone else.

He used to say that he was lazy about doing sports and that weight training was only to keep fit, but now he has joined a gym and goes there very often. There’s a catch that he’s trying to hide something or is more focused on someone else.

10. He acts guiltily or defensively when confronted

If your husband becomes defensive or acts guilty when you raise your concerns, it could be a sign that he’s hiding something or feels guilty about something, such as infidelity. It’s essential to handle this situation with care and have an open and honest conversation with your husband about your concerns. It’s crucial to resolve any issues that may be causing tension or mistrust in the relationship and to work together to rebuild trust if necessary.

If you have concerns that your husband may be cheating on you, it’s essential to have an open and honest conversation with him to address any issues. Don’t let doubts fester, as this can lead to unnecessary stress and harm in the relationship. It’s also essential to remember that each relationship is different, and these behaviors may not necessarily mean infidelity. Trust your instincts and seek support if you’re feeling uncertain about your relationship.